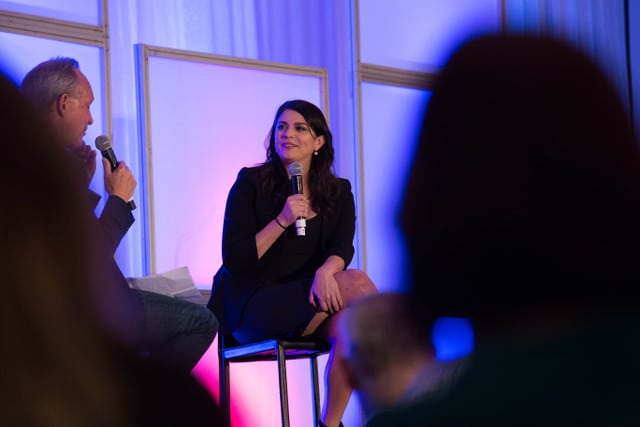 Cecily Strong in a Conversation You Wished You’d Started

For someone who plays the girl you wish you hadn’t started a conversation with at a party on Saturday Night Live, Cecily Strong conversed very well during Tuesday afternoon’s session at the sold-out 2017 Social Shake-Up in Atlanta, making trenchant points about social media and celebrity. There were plenty of laughs, too.

The Internet “is a weird place” when fans feel “they have too much access to you…it can get scary,” Strong said in a colloquy with Rob Gregory, president, WHOSAY, during the show. Gregory asked if Strong feels obligated to share on social with her fans. “I don’t see it as an obligation…it’s a benefit [for performers and fans],” she said. And she has a basic social strategy. She’s not on Twitter: “I can’t boil down my ideas to 140 characters.” Her Instagram feed is public and she keeps it “positive,” posting pictures of things she likes, such as dogs. Her Facebook page may be more negative because it’s there she includes issues she’s fighting, she said.

Listen up, brands: Strong’s pragmatic about endorsement opportunities. Asked which brands she’d endorse on social, she joked, “The simple answer is the one that pays me the most.” She continued, only partly in jest, “The one with the least rabid fan base…who would attack me the least.” More seriously, but joking a bit, Strong said she’d prefer something relatively safe, like “a dog charity probably…we all agree on dogs politically,” although she noted she loves JetBlue. And with a father in the PR business, it was little wonder that Strong had sound advice for celebrities or brands who make mistakes on social: “Don’t be defensive, own up to it…and do it right away.”

Responding to audience questions, Strong was hit with a tough query immediately, when a Shake-Up attendee noted SNL had lampooned his brand, which had begun a storytelling campaign. Strong answered adroitly, noting she likes when brands tell stories on social “if they’re sincere and done well…and don’t stop [storytelling] just because SNL lampoons you.”

On other SNL-related questions she noted, “It was exhausting to play Melania Trump” because it required her to “keep up with” current events. Strong also said she’d like to see more women behind the camera and that she wants to create content through producing, writing and directing.

Registration is now open for the 2018 Social Shake-Up in Atlanta.