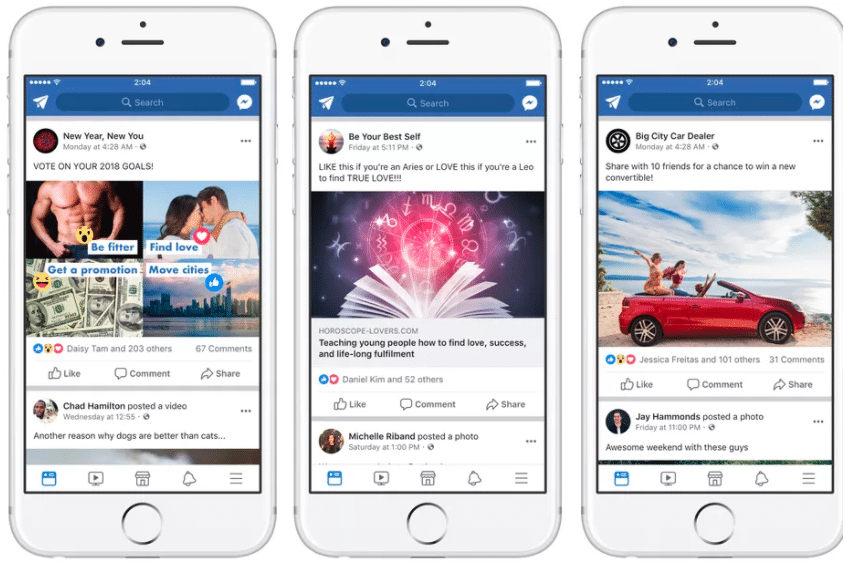 Facebook has a warning for brands: Go authentic or go home.

Starting today, Facebook will demote what it calls “engagement bait,” posts that lure users into interaction by explicitly asking for likes and shares without offering editorial value.

The posts are one way that brands can take advantage of Facebook’s (ever more discriminating) News Feed algorithm by boosting engagement to gain more organic reach. But the platform is taking action in response to widespread complaints of such posts, it said in a blog post, likely forcing some brands to rethink their approach to the platform.

Facebook provided a few examples of engagement baiting, such as asking people to vote on their 2018 goals, or the chain-letter approach of “Share with 10 friends for a chance to win a new car.” Other methods include “Tag somebody who loves dogs as much as you,” or lines such as “LIKE this if you’re an Aries or LOVE this if you’re a Leo looking for love,” for example.

It’s not just individual posts that will be demoted on the News Feed—brands that ignore Facebook’s warning will also feel the sting by having all of its content demoted, not just those classified as engagement bait.

“Over the coming weeks, we will begin implementing stricter demotions for Pages that systematically and repeatedly use engagement bait to artificially gain reach in News Feed,” said the blog, which was written by Henry Silverman, Facebook‘s operations integrity specialist, and engineer Lin Huang. “Pages that repeatedly share engagement bait posts will see more significant drops in reach.”

To give publishers and brands time to adapt to the change, Facebook said it will roll out the page-level demotion over several weeks.

Of course, not all posts that ask for engagement will be affected. Posts where people ask for authentic help or advice—missing children reports or nonprofits raising money for a cause, or even just people asking for travel tips—won’t be adversely affected, the company says.

The move hammers home Facebook’s stated goal of weeding out spam and promoting higher-quality and authentic content in its feed. But in a broader sense, it underscores the idea that engagement metrics can be superficial and misleading. While engagement baiting may build brand awareness, the tactic of goading users into liking or sharing a post—without actually interacting with them—is a one-dimensional definition of “engagement.”