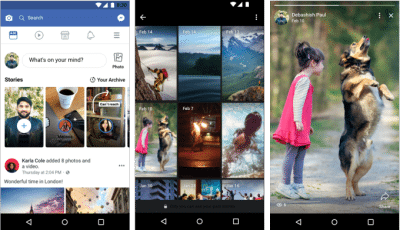 But Facebook Stories usage appears to be growing despite its initial status as a social media ghost town, per an announcement made at Facebook’s F8 Developer Conference by head of product Chris Cox:

Three new Facebook Stories features are currently being tested in India and due to roll out in the U.S. soon, according to TechCrunch. These updates will likely be useful enough for professional communicators to warrant making Stories a new priority in their Facebook strategy. Here’s an overview of how each feature can help communicators.

An instant archive of Stories content. The ability to capture and store past Facebook Stories to mobile devices will make life easier for communicators who want to make their Facebook feeds stand out with of-the-moment visuals. Users will now have the freedom to revisit Stories, edit them and post them later to Facebook feeds. This will allow communicators to play the long game as they work toward crafting the authentic, real-time messaging that online their audiences crave.

Storage in the cloud. In addition to saving Stories that were previously inaccessible after 24 hours to their mobile devices, users with limited storage on those devices can privately and directly save Stories to their Facebook account. This will be particularly useful for communications teams that have a person “on the scene” capturing live content while another team member accesses, edits and reposts from HQ (or any desktop).

Voice to text posts. Users will soon be able to capture text using voice-to-speech, making sound bites much quicker to incorporate into posts. A brief message in large text can sometimes be just as impactful as a compelling photograph—and an efficient way to provide context around footage captured on the fly.