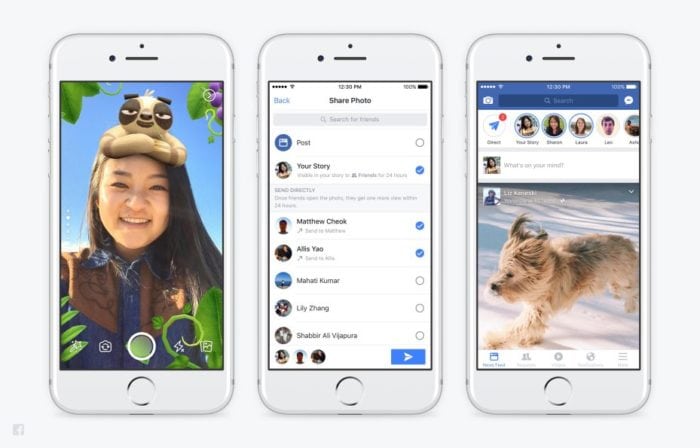 Facebook just unveiled another missile in its arms race against Snapchat. The social media giant has launched Stories, a Snapchat clone that gives Facebook users access to the two most unique aspects of the Snapchat interface: content that disappears after 24 hours and augmented reality lenses. While Facebook has already launched Snapchat-like platforms Instagram Stories and Messenger Day, this is the first Snapchat-pioneered feature to make its way into the central panel of Facebook’s marquee app.

To post content to Facebook Stories, one needs only swipe right (another interface feature borrowed from Snapchat), take a photo or video and apply filters, stickers or augmented reality lenses (which Facebook calls “masks”). Users then have the option to post their Story to their news feed or send it to individual groups or friends directly.

While Facebook has not yet rolled out Stories to its business pages, communicators now have the option to start experimenting with Facebook Stories within their personal networks. Given Facebook’s current business model, which relies upon advertising revenue, it’s likely that sponsored Stories are on the horizon. Once that happens, communicators struggling to measure success and prove ROI on Snapchat will be pleased to find their favorite Snapchat features paired with Facebook’s robust suite of analytics tools.

The real question is whether Snapchat’s young audience, particularly its Generation Z users, will make the switch back to Facebook, a platform that has fallen out of favor with the teenage set in recent years. Who knows what Snapchat will roll out next, given its much-buzzed-about IPO and newfound identity as a camera company. Virtual reality sunglasses? Drones that fly around and post to social media? Whatever Snap Inc. dreams up next, one thing is clear: Facebook will be watching.