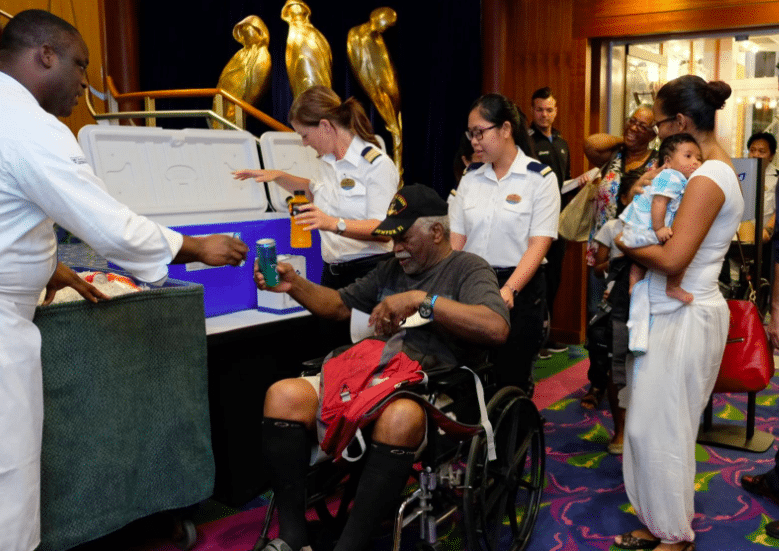 The cruise ship industry, much like the airline industry, is often on the wrong end of crisis communications. But Hurricane Irma has given Royal Caribbean the chance to show its humanitarian side, even as it deals with pressing customer service issues.

The Miami-based company is mobilizing four of its ships to help people in need, in coordination with the federal government as well as local governments in St. Thomas and St. Maarten. Its humanitarian operations—which include transporting evacuees to safety—is also standing by ready to assist in Key West and other nearby locations.

“We have been such a part of the Caribbean and South Florida communities for so many decades. We are worried and anxious,” Royal Caribbean’s CEO Michael Bayley told the Miami Herald on Saturday. “At the end of the day, we want to try to help as much as we can.”

Most of the firm’s ships in the region have few if any tourists following Irma-related cancellations, but are still fully staffed and stocked with food and supplies. The firm’s Majesty of the Seas, for instance, visited St. Thomas and St. John, providing food, water and other emergency aid to first responders and citizens, while stranded tourists in St. Maarten were picked up and taken to safety in Puerto Rico. “Additionally, we have Empress of the Seas ready to assist Key West once the impact of the storm is known,” a company statement read.

The company is also taking Hurricane Irma relief donations on its website, committing to match donations up to $1 million.

The way Royal Caribbean has handled customer service in the crisis, even as its headquarters lost power, is a crisis model communicators should take note of. A statement posted at noon today on the company’s website offered updates on cancelled cruises and 100% refunds for affected tourists, plus a 25% credit that could be applied to future cruises.

Royal Caribbean has also taken to Facebook with multiple weather updates for those with tickets to sail later this week. And the updates aren’t solely text-based—once or twice a day, the company posts video updates on the hurricane’s progress via Royal Caribbean’s chief meteorologist James Van Fleet.

While Royal Caribbean International is certainly no stranger to hurricane season, the way it has handled Hurricane Irma has gone above and beyond. Cynthia Martinez, the company’s Miami-based director of global corporate communications—who will be speaking at next month’s Digital PR & Marketing Summit—understandably could not be reached for comment for this story, but she will surely have some timely wisdom to share at the conference.