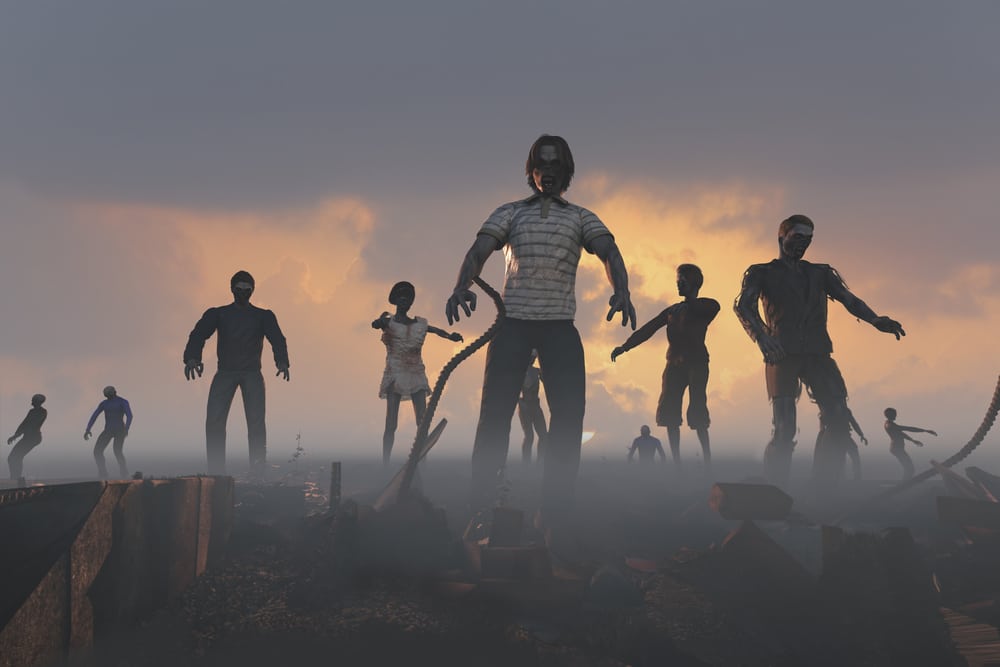 Anyone who has had a five-minute conversation with me—or follows me on Twitter—knows that I’m a huge fangirl of “The Walking Dead.”

Since the sold-out Social Shake-Up Show was recently held in Atlanta, where “The Walking Dead” is filmed, I took the opportunity to visit some of the show’s key locations. I saw Rick Grimes’ house, the CDC (aka the Cobb Performing Arts Center), Woodbury (the main street in Senoia, Ga.) and even the gates of Alexandria (also in Senoia).

I have found that there is no life lesson—or social media lesson—that can’t be addressed by the show. So here are four such takeaways from “The Walking Dead.” One of my biggest pet peeves is when people proclaim themselves a social media expert.

One might say our team of survivors on “The Walking Dead” are experts in the zombie world. They’ve made it through seven seasons. But at least once a season, someone gets complacent and forgets to make sure a zombie is sufficiently stabbed through the brain—and then someone gets bit.

I’m not saying you can’t be really good at what you do. Heck, I’ve been doing social media for longer than I’d care do say, but that doesn’t mean I’m an expert. It means I’m a professional—but every week there’s a new feature, platform, use case or innovation to discover, a new bar to jump over, a new algorithm to conquer. You can’t know it all (well, unless you’re Scott Monty).

Plus, being social is about being human, not a zombie. Accolades of expertise are something that should be bestowed upon you, not self-proclaimed. Be humble, be human, be real.

Stupid Stuff Will Get You Killed

Social media is a zombie-eat-human world. One mistake can land you on the front page of Mashable and Buzzfeed for all the wrong reasons. I’m sure I don’t have to call out direct examples of social disasters, but we’ve all seen them.

Not thinking through your hashtags. Possibly the most famous fail was Susan Boyle’s album launch party, #Susanalbumparty. Caps in hashtags are allowed and encouraged, folks, and could have prevented the double-entendre ridicule of this example. Another fail is simply creating a hashtag without understanding what they are and what they do, just to brand something. Do you like having conversations with yourself?

Forgetting that you don’t own your social message, your fans do. Think you can pay for social recommendations and get away with it? Think you can talk about your product amid a scandal and not address it?

Letting interns manage your social account just because they have social media accounts. Social media marketing is a skill, just like coding or engineering. Yet people think that having a Twitter handle makes you an expert. If that were the case, I’d go home at five every day and take three-hour lunch breaks.

There’s safety in numbers when zombies come around. Social media can be a cruel world, too, and you’re going to need support. Surrounding yourself with strong social media connections can go a long way to surviving out there.

One of the best things you can do to build your digital tribe is to network at conferences and stay in touch with the people you meet. Whether it’s on Twitter, Slack, Facebook Messenger or another social platform, don’t let the connections you’ve made dwindle.

At the Social Shake-Up, I presented at a panel session with my colleague about the #WeAreCisco employee advocacy program. But before she worked for Cisco, she and I met at a conference and rapidly became Twitter besties. Twitter chats are often good ways to find your tribe as well. #ChatSnap’s own Kristy Gillentine was also at Social Shake-Up, and while we’ve met on Twitter several times, by connecting in person we became buddies in real life.

The idea of finding your tribe also applies when you’re looking to build a social media presence for your brand. You don’t just want to find followers, you want to find the right followers. Where are your people, the ones who will be your ambassadors and engage with your posts? Find your tribe and you’re on a good path to social media success.

You Need the Right Tools

Where would Daryl be in the apocalypse without his crossbow? Or Rick without his revolver? Or Michonne without her katana?

Same in social. If you’re going to be successful, you need the right tools. There were many good vendors with solutions at Social Shake-Up. Find the tool that fits for you—some are even free. Canva should start paying me for how many times I recommend them for social image work. Delmondo has been an invaluable tool for us as we delve into the tricky world of Snapchat metrics. Tools are important.

Personally, I know I’m no match for the zombie apocalypse, and no matter how much of “The Walking Dead” you watch, you’re probably in the same boat. But these social media tips can get you through the day-to-day struggle in social.

Carmen Collins is a social media manager on Cisco’s Talent Brand team. Over her career, she has helped several Fortune 500 companies engage with their audience through great content and building relationships.