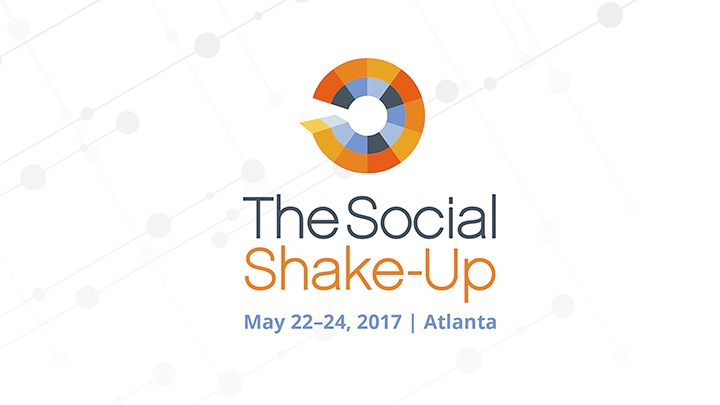 Banafsheh Ghassemi’s passion for using technology to promote empathy can be traced to a turbulent childhood.

Ghassemi is the winner of the first annual Robin Carey Connector Award, named after the late Robin Carey, the founder of The Social Shake-Up Show, which will be held May 22-24 in Atlanta. Ghassemi will be given the award—which honors an individual who has demonstrated an unyielding desire to connect people—by PR News at the Movers & Shakers Awards Luncheon May 23.

Ghassemi was born in Iran, and her parents were both politically active members of the resistance during the Iranian Revolution. As the revolution intensified, her family was forced to remain in exile in England and become political refugees when she was just 11 years old.

Prior to the revolution, Ghassemi’s mother was a trailblazer, serving as a deputy minister in Iran at a time when opportunities for women were limited. And it was her mother who held the family together during those lean years in exile.

“She was a great inspiration; she was and still is my hero,” says Ghassemi. “She taught me that being a woman has nothing to do with being held back.” Ghassemi’s career in using technology to connect people began, naturally, in the telecommunications field. After serving as a director of customer program management with Sprint—helping to launch the nation’s first 4G wireless network—Ghassemi became the vice president of marketing at the American Red Cross in 2010, where she led the organization’s customer experience division.

Ghassemi stayed with the Red Cross until 2014, when she decided to form her own company, Tangerine Lab, which she cites as her proudest professional accomplishment.

Central to Ghassemi’s approach is the idea of human-centered design—a framework that develops solutions by involving the end user in every step of a problem-solving process. Tangerine Lab, a customer- and brand-experience design and innovation agency, has helped organizations such as the Public Broadcasting Service, The World Bank Innovation Hub, W Hotels, Cool Planet and Verizon Wireless bridge the digital gap with their customers and constituents.

“With human-centered design, whatever you’re designing, you’re putting the end user at the center of your design and looking at a problem not through an organization’s eyes, but the customer’s,” she says.

Her latest venture may be her most fulfilling. Ghassemi is consulting with the government of Madagascar’s ministries of nutrition and health in trying to help solve the African nation’s chronic child malnutrition problem. In fact, just hours after she is set to receive the Robin Carey Connector Award, she will be flying back to Madagascar.

“We’re not nutrition experts, but we have a method we’re teaching their government to use to solve some of the most severe cases of child hunger,” she says. “For years, they’ve tried to tackle the problem through typical PR and marketing methods, as though if they just tell people about the food groups, they’ll eat better. But we’re teaching them how to walk in the shoes of a mother who is living on $2 a day, which is what about 90% of the population there lives on.”

Learn more from Banafsheh Ghassemi at The Social Shake-Up, which will be held May 22-24, 2017, in Atlanta. Brand communicators from Coca-Cola, Dunkin’ Donuts, Microsoft, Arby’s and many more will speak on a breadth of topics from content marketing to measurement to Snapchat strategy.

“She was a mentor and a sister and a best friend,” Ghassemi says. “I would spend weekends with her and her husband, cooking, drinking and talking about everything under the sun nonstop until we would fall asleep—then we’d wake up the next day and start it all over again.”

In fact, the last time Ghassemi saw Carey before her untimely passing in late 2015, their passion for conversation led to a frustrating but funny train ride. Ghassemi was staying with Carey in a house outside of New York City and they would take the train into the city together every day.

“Once, we were so deep in conversation on the way home, we had to get off the train four times because we kept missing our station,” she laughs. “We got home about four hours later than we should’ve.”

The Future of Social Media

For Ghassemi, the most important aspect of social media is fostering improbable connections. For instance, one of her tweets about healthcare was retweeted by none other than President Obama. And her personal passion for graffiti and street art led her to connect through social media with some of the genre’s most high-profile artists.

“Without social media, I would have no opportunity to connect with them,” she says. “Implicit in that is, when you connect people that don’t typically cross paths, social media can create a level of empathy that never existed before.”

Looking to the future, Ghassemi hopes that the rise of virtual reality will nurture more understanding of complex issues. She uses the Syrian refugee crisis as an example.

“Virtual reality is hauntingly real,” she says. “If you can have direct communication with a mother and a child in a refugee camp, maybe you can start to solve the problem together, as opposed to just having a political opinion about the issue.”

To Ghassemi, that focus on empathy, born from her own family’s background as political refugees, should be central to the ongoing development of social media.

“On social media, people often yell at each other and are rude without even knowing each other—so I’d like us to take social media back to where it could generate the most value, which is to build empathy.”