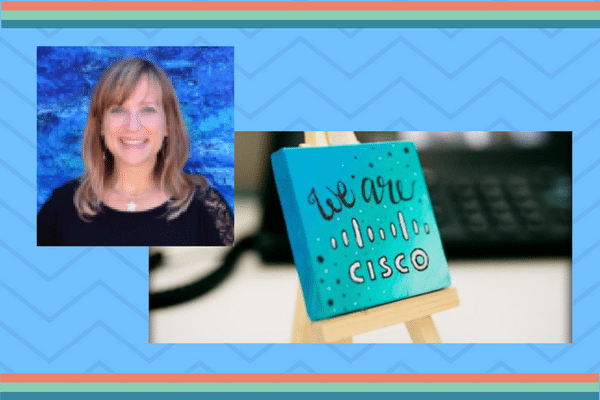 Digital Talent
Back to What’s Shakin’

When executives talk about how awesome their brand is, most of us just tune out. And that goes double when a logo, a brand channel, extols its own virtues.

Which is why employee advocacy programs can have such an impact: people trust conversational content from employees much more than canned endorsements from the C-suite.

And few companies have figured out how to do employee advocacy half as well as tech giant Cisco. The company’s #WeAreCisco employee social program has put even ephemeral platforms like Snapchat and Instagram Stories front and center—a rarity for a major B2B company.

We recently caught up with the architect behind #WeAreCisco, Carmen Collins—who will be speaking about Snapchat and Instagram at the 2018 Social Shake-Up Show—about lessons learned in 2017, the driving narrative behind #WeAreCisco and why she believes Twitter needs to “either change significantly or go away.”

The Social Shake-Up: How is your social media team positioned within Cisco?

Carmen Collins: We’re under the HR function, but essentially act as a marketing arm of the Cisco brand. We’re marketing Cisco’s culture to make future talent want to work with us.

The Social Shake-Up: What’s the story behind #WeAreCisco?

Collins: #WeAreCisco started with the idea that potential employees want to hear directly from the people that work at an office, and gives us a chance to showcase our culture and people on social media.

LinkedIn has reported that those who hear about a company directly from an employee are much more likely to apply or take a job there; we’ve seen that to be true in terms of the high employee engagement we’ve seen on the #WeAreCisco channels. #WeAreCisco is our “tribal call” as employees.

We realized that if the brand says it’s a great place to work, it’s not trusted as much as when employees say it. The Edelman Trust Barometer has a statistic from 2017 that employee voices are trusted by 16 points more than the CEO’s voice. That’s because the CEO is expected to say good things; employees aren’t.

The Social Shake-Up: What were your biggest social media lessons learned in 2017?

Collins: We’ve seen the power of live video to reach millennials and Gen Z-ers. We’re continuing to use more live video; learning how to shoot video and photos natively within Snapchat was very helpful.

We saw the power of raw platforms like Snapchat and Instagram Stories to increase employee engagement and show potential talent an authentic workplace culture. We’ve learned that the more produced our live videos are, the less engaging they are. People want the rawness of seeing real days-in-the-life of employees. Authenticity works.

The Social Shake-Up: What are your top social media predictions for 2018?

Collins: Twitter will need to either change significantly or go away. Before the 2016 election, I would have said Twitter wouldn’t have made it into 2018; that it would get bought or turn into a platform similar to ones we already have.

Now that we have a Tweeter-in-chief, Twitter remains relevant within the news cycle, but it’s difficult to see the applications for brands outside of getting advocates behind a political cause or movement.

Twitter will need to provide more opportunities for on-platform engagement if it’s going to survive in the current social landscape. Twitter will need to adapt, embrace its real-time nature or it might go by the wayside. There are brands that are now making the decision to take their resources elsewhere and focus more on channels like Instagram.

Twitter is, at its heart, real-time. But it is faltering by allowing bots to take over, hiding the “real” and not enforcing its terms of service in favor of being in the news cycle.

The Social Shake-Up: What’s your personal social media motto to live by?