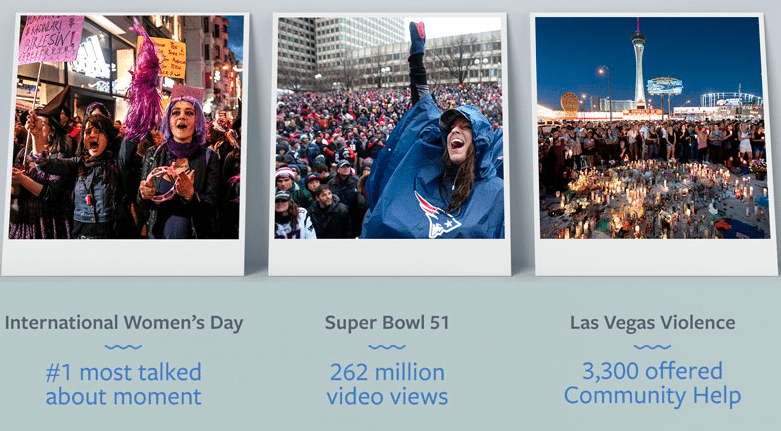 During the F8 conference earlier this year, Mark Zuckerberg talked about how Facebook was shifting its focus toward building community. So, it should come as no surprise that Facebook’s recently released 2017 Year in Review focuses on the top ways people used the platform to come together.

This stroll down memory lane including the most talked about moments of the year and the top examples of people coming to each other’s aid and sharing significant moments on the platform.

International Women’s Day topped the list of the moments that people discussed globally in 2017. In fact, twice as many people and brands celebrated this day compared to the same day in 2016

Fans across the globe tuned into the second most talked about moment, Super Bowl 51, using their News Feeds to discuss not just the events of the game, but also the top ads and Lady Gaga’s incredible performance. Facebook videos related to the Super Bowl received over 262 million views collectively.

Finally, the third most talked about moment was a solemn one. The mass shooting in Last Vegas Oct. 1 generated a worldwide conversation, leading more than 3.300 individuals to use Facebook’s Crisis Response tools in the hope of sending help to those affected by the violence.

The earthquake that devastated Mexico in late September topped the list of moments that people used Facebook to come to one another’s aid. The natural disaster drove the highest number of interactions with Crisis Response on Facebook for the year. Millions of people marked themselves safe or provided aid and news outlets responded to the crisis via the platform.

Another natural disaster, Hurricane Harvey, saw the platform’s community raise over $20 million in what amounted to the biggest fundraising effort for a single crisis on the platform in 2017. And the One Love Manchester event served was the most viewed video and live broadcast on Facebook in 2017, generating more than 80 million views and raising over $450,000 for victims and their families.

Other notable moments include the total solar eclipse, which inspired the creation of more than 20,000 Facebook Events in more than 80 countries, and the Women’s March on DC, which brought together 500,000 people, amounting to the largest Facebook event for a single cause all year.