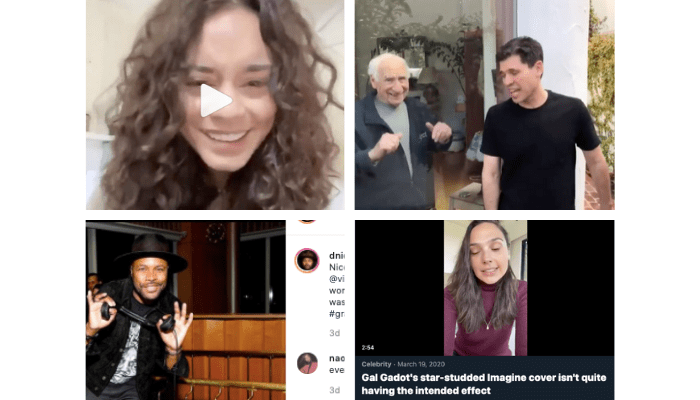 COVID-19
Back to What’s Shakin’

For Better or Worse, Influencers Reach Out to Homebound Audiences

As the coronavirus keeps millions at home, influencers have leveraged their followings in an attempt to distract, entertain and soothe worried souls. Communicators and marketers, uncertain how to handle their influencer marketing efforts in an unforeseen online environment, face challenges ahead as they try to strike the right tone with an anxious public.

Influencer efforts over the last week have been a mixed bag, with some celebrities winning hearts and minds as they explore new ways to connect with their audiences amid the outbreak, while others struggle in terms of both tone and content. Here is a look at recent attempts by influencer personalities to join the COVID-19 conversation—and lessons learned from each.

Imagine All the Little People

“Wonder Woman” star Gal Gadot took to IGTV to air a celebrity-studded rendition of The Beatles’ “Imagine.” While a few entertainment outlets were enchanted, the overall sentiment from the public was that the “We Are the World” format was tone-deaf (quite literally, in the case of many of the video’s singers). Celebs’ attempts to lighten the mood with their vocal gifts alone did not impress those that felt influencers’ time would be better spent donating their millions to worthy charities, or actively promoting COVID relief.

The takeaway: Audiences have myriad streaming services and platforms to entertain them while on lockdown. If influencers want to use their clout for good, the field is wide open, but self-proclaimed “uplifting” or “inspiring” messages are better saved for brighter days.

Gal Gadot and her band of celebrities right before filming their “Imagine” cover videos pic.twitter.com/ukeS5QWa02

A Walk-In Clinic for Influencer Cameos

Celebrity account participation ranged from minimal (a thumbs-up emoji from Biden) to words of encouragement on separate channels, as with New Jersey Governor Phil Murphy:

Throughout the stream, D-Nice periodically offered shout-outs to health care workers and medical professionals. By the end of the broadcast, he had reportedly won 600,000 new followers.

The takeaway: With social distancing the new normal, influencers that create communal virtual experiences are quickly breaking away from the pack. Don’t force it, though—if your core audience is not likely to be hitting the dance floor on a Saturday night, you’re probably not the ideal virtual club host. However, as public figures and entertainers showed on Saturday, there’s no harm in joining the party as an attendee. Influencer communications during the crisis can strike a balance between creating content and experiences that uplift audiences, and shining a light on other creators doing a great job. D-Nice also live streamed DJ sets several nights in a row before Saturday’s blowout, a best practice in live video on social media: Establish a regular cadence so viewers know to look out for your next live event.

On March 16, “High School Musical” star Vanessa Hudgens posted an Instagram Live video in which she appeared to brush off the seriousness of the pandemic. Responding to the possibility that a quarantine could stay in place through July, the actress and singer said: “Sounds like a bunch of bullsh**, but, like, it’s a virus―I get it. I respect it, but, at the same time, even if everybody gets it, yeah, people are gonna die. Which is terrible, but, like, inevitable? I don’t know. Maybe I shouldn’t be doing this right now.”

What was inevitable was the outcry following Hudgens’ comments, a day after which she posted a pseudo-apology in her Instagram Story: “I realized today that some of my comments are being taken out of context,” she argued. “It’s a crazy, crazy time. I am at home [on] lockdown, and that’s what I hope you guys are doing, too. In full quarantine and staying safe and sane. I don’t take this situation lightly—by any means. I am home. Stay inside, y’all.”

Since the blowback, Hudgens’ Instagram account has leaned into “stay inside” and social good messaging, with her profile reading “STAY IN!!!! Don’t go out. Let’s get thru this together ❤️” and linking to the Feeding America website.

The takeaway: If—in their live videos especially—your spokesperson or influencer runs the risk of off-the-cuff comments that minimize the seriousness of the crisis, have them focus on written messages instead. If they miss the mark, influencers should be prepared to pay out-of-pocket for unsympathetic social media posts via large donations to charitable causes. (One would hope they are doing so anyway.) It is far more tasteful to focus on proactive solutions than complain about the reality of being stuck indoors, even if it is tempting to express solidarity with cooped-up followers.

Writer Max Brooks and his father, 93-year old comedy icon Mel Brooks, took to social media with a darkly humorous PSA around reducing COVID exposure to senior citizens. With the elder Brooks safely behind a glass sliding door, Max shared the importance of younger people taking increased precautions around seniors, joking that if his father were exposed, he could potentially spread the virus and “wipe out a whole generation of comedic legends.” At the end of the video, Mel shoos his son away with a muffled “Go home!”

A message from me and my dad, @Melbrooks. #coronavirus #DontBeASpreader pic.twitter.com/Hqhc4fFXbe

Since the Brooks’ video was posted, White House health officials cautioned that younger people could be “at more risk than previously thought” for hospitalization and severe symptoms. Still, the PSA could help contextualize new measures such as Matilda’s Law, which as of March 22 prohibits those 70-plus (as well as those with compromised immune systems and underlying conditions) from leaving their homes in New York State as well as setting strict limits on visitation.

The takeaway: When done thoughtfully, laughter can be the best medicine amid a crisis, and in this case, a well-thought out, intergenerational message landed. As government authorities and the media take aim at millennials as the source of increased viral spread, a lighthearted, family-focused approach might be just what the public needs right now. (Plus, it doesn’t hurt to have a decades-long pedigree in comedy around extremely dark subject matter.)