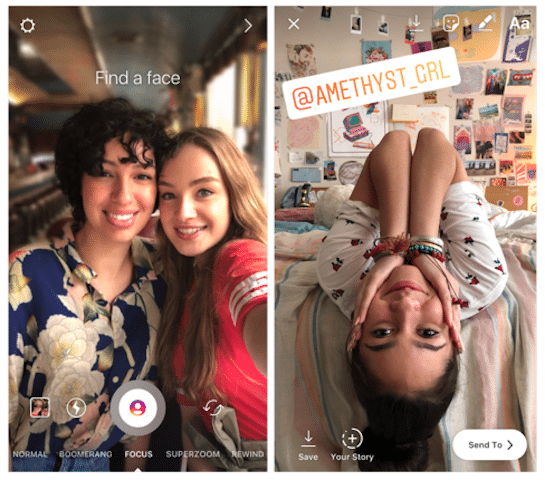 Instagram announced yesterday that it was releasing two new features, in an apparent effort to step up its competition with Apple and Snapchat.

The photo-sharing platform officially rolled out Focus, which it has been publicly testing since March. In a press release, Instagram explained that when a user uses the Focus feature (available within Stories) to frame a selfie or photo of a friend, “you’ll notice the person stays in focus while the background softly blurs—making sure they stand out in a striking way.”

Similar functionality is already available as “portrait mode” on some smartphones, but Focus is available on a wider range of iPhones than Apple currently provides, and “select Android devices,” according to the release. Focus can also be used to record video, which is not available in Apple or Android’s portrait features.

Instagram also announced a new @mention sticker (only available on iOS at the moment) so that users can tag friends in their Stories. Though text mentions have been available within Stories for over a year, the sticker is more aesthetically pleasing. Once the sticker has been selected, “you can then rotate, scale and place your sticker where you’d like.” Like the previous text mentions function, the tagged user will receive a notification, and anyone viewing the story can click on the sticker to visit their profile.

This isn’t the first change Instagram has effected recently to make it easier to find new accounts: Last month, the platform added functionality so that @mentions and hashtags within users’ profiles will become hyperlinks, which can be especially valuable for brands. Ciji Townsend, public relations manager at Cox Communications, explains that “adding a handle to your Instagram profile allows for a seamless process to instruct people via a call-to-action to another account and extends your page reach.” And, if your organization uses a specific hashtag, “adding a linked hashtag to your profile will increase the hashtag’s appearance in searches,” she adds.

Instagram has been rolling out a slew of new features for the platform as of late, and evidently it still has more in the works: TechCrunch reported on April 10 that an Instagram spokesperson confirmed that it is currently testing a Nametags feature very similar to Snapchat’s QR codes. Users would be able to instantly follow a person by scanning their “nametag,” thereby streamlining the process. There is no release date for Nametags yet, but it’s safe to say that this will be a big year for Instagram.