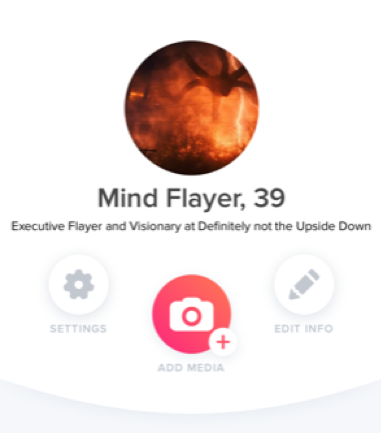 Lessons From the Mind Flayer’s Viral Marketing Play On Tinder

Whatever the reason, I found myself wondering: Why didn’t the Mind Flayer use digital tools to find its next hosts for a hostile Earth takeover?

Perhaps under the Mind Flayer’s influence, I set up a Tinder profile for the king of the Upside Down. After all, what better way to connect with large groups of people/dates/hosts quickly than on an app with millions of users (five million of them paid subscribers, according to the New York Times)?

In less than five minutes I put together a profile with the best photos Google Images could offer, including one of the Flayer’s main man Billy and one of Will’s artistic renderings from Season 2.

In about two and a half hours I connected with more than 70 matches…until I got banned.

The Mind Flayer didn’t say anything offensive. He just encouraged people who messaged him (and there were a lot of messages) to go to abandoned steel mills—don’t mind the rats—or asked about fertilizer preferences. You know, the usual Tinder stuff.

But was the Mind Flayer—the Shadow Monster himself—shadow banned? No, because he got a lot of matches, in effect, telling Tinder’s algorithm that other users enjoyed his content.

No, the Mind Flayer was most likely banned by Tinder for using copyrighted material—the only images that exist of the Mind Flayer, unfortunately—paired with the fact that I do not work for Netflix or own the rights to his likeness.

I was a little disappointed that my run as the Mind Flayer only lasted about two hours. I hadn’t imagined so many accounts would match with the profile so quickly, and it was fun that people got the joke right away.

My experiment also speaks to Tinder’s potential as a platform for viral marketing. Here are a few lessons and industry reminders from the experience, for those looking to test the waters with a similar stunt:

While my time as the Mind Flayer was short-lived, I just hope that the next time you find yourself swiping through and you see Alexei with his cherry Slurpie, you think of me—and the fun you could have with your brand, albeit on an unconventional platform.