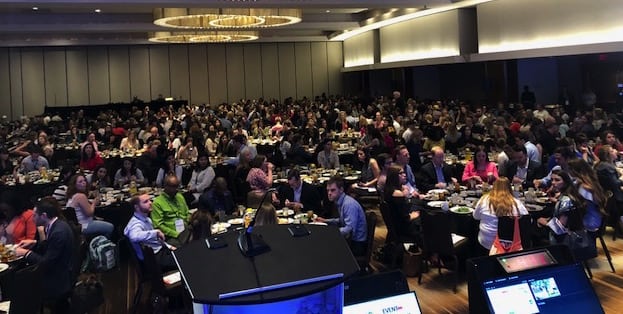 I had the honor at this week’s Social Shake-Up Show in Atlanta of bringing up to the podium the winners of the 2018 Movers & Shakers and Rising Stars Awards. As you can see from the photo above—a shot I took myself as the May 8 awards luncheon began—it was a seriously big crowd. More than 700 people, in fact. A sold-out crowd. I’ve been in front of audiences before, but never one so big.

To me that meant one thing: the luncheon would be a massive celebration of excellence in social media marketing and communications.

The luncheon, which was sponsored by Business Wire, kicked off with Atlanta City Councilman Amir Farokhi joining me on the podium, proclaiming Social Shake-Up Week in the city of Atlanta, and then we moved right into the awards presentations.

The Movers & Shakers winners were recognized for their leadership in social media marketing and, in particular, their willingness to take risks and reshape perceptions as they attempted to reach new people on behalf of their brands. Here’s just a sampling of what we celebrated as the Mover & Shakers stepped up to the podium: • One Mover & Shaker winner was a leader of the #BankBlack MOVEment, which encouraged African-Americans to transfer their money to African-American-owned banks in a demonstration of economic and political force.

• Another transformed social media from an engagement machine to a revenue producer for her brand.

• Yet another Mover & Shaker winner took a social-centric approach to raising money for hurricane disaster relief, fetching donations from 758 donors in a little over a month.

We also brought to the podium our Rising Stars honorees—many of whom we expect will one day be leading their own sessions at Shake-Ups to come. Here are just a few star-making accomplishments that we celebrated on May 8:

• One Rising Star returned to his alma mater to launch a social media marketing major and a student-run agency that completes projects for clients including Mountain Dew and Major League Baseball.

• Another Rising Star serves as a facilitating hub for all of  Turner’s social media teams, which includes CNN and Cartoon Network, and digital assets including Bleacher Report.

• And another ran a California Breweries campaign that connected California craft beer lovers and brewery owners. We gave a special spotlight to this year’s recipient of the Robin Carey Connector Award—Carmen Collins, senior social media & talent brand lead for Cisco. The award, which memorializes the late founder of the Social Shake-Up, honors an individual who has demonstrated an unyielding desire to connect people and encourage the sharing of social media marketing wisdom. As she accepted her award from Social Shake-Up keynote speaker Brian Fanzo, CEO of iSocialFanz, Collins said to the crowd, “To the world, you may be one person, but to one person, you may be the world.”

To close out the luncheon, Adam Cotner, director of sales engineering at Lithium Technologies, presented the Customer Service Team of the Year Award to Southwest Airlines, a longtime leader in bringing a human touch to digital communications.

See profiles of all the Movers & Shakers and Rising Stars honorees.

Steve Goldstein is editorial director of the Social Shake-Up and PR News. @SGoldsteinAI