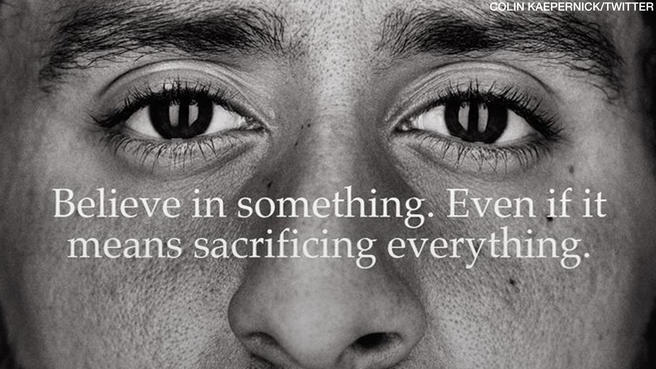 Nike Just Did It: Kaepernick’s New Deal is a Smart Calculated Risk

It’s been just over two years since Colin Kaepernick, then a quarterback for the San Francisco 49ers, took a knee at a game during the National Anthem. Now, with Kaepernick at the center of a new ad campaign for Nike, it seems the other shoe has finally dropped.

Kaepernick made himself a pariah with that kneel, displaying on a national stage his feelings about police brutality toward communities of color. The conservative-leaning NFL owners, and their large legion of conservative fans, quickly escalated his action to crisis levels. After leaving the 49’ers, no other team in the league would take him.

Some criticized Kaepernick’s game as a reason for the seeming shut-out, while others knew that he had touched a political nerve. Kneeling during the National Anthem set off a national debate. The politics of this split may have been race-related, but the truth was not so black and white.

Fast forward to this Labor Day, when Nike announced Kaepernick as the main face for the 30th anniversary of its “Just Do It” campaign. Heaps of praise, and condemnation, were immediate. #BoycottNike continues to trend as conservatives across the country destroy the Nike goods they paid good money for in protest, and Nike shares took a slight dip. Some have pointed out why destroying clothes to protest a perceived disrespect toward veterans may be hypocritical:

If you burn/destroy clothes and shoes instead of bringing them to a veteran charity, don’t talk patriotism or honoring vets.
You are throwing away something SOMEONE you say you respect needs to be spiteful and look cool on social media.
It proves your outrage a lie.#NikeBoycott

Whatever your personal feelings on Nike’s Kaepernick campaign, the shoe manufacturer has instantly distinguished itself from other athletic brands by aligning itself with an ideological movement. It’s a move similar to that which Red Bull energy drink made with its forays into programming music and art events, changing the cultural stigma around what an energy drink brand could be associated with. By endorsing Kaepernick, Nike also endorses his values, and in doing so aligns itself with an influencer who already has both a fully-formed ideological viewpoint and strong support base.

The campaign shows that Nike knows its audience enough to take a calculated risk by weighing in on a political debate. “We know from APCO’s research among hyper-aware and engaged consumers that they have high expectations for companies to take a stand on the social issues that impact them personally,” says APCO Worldwide senior director Katie Sprehe. “It’s critical these days to understand the beliefs, attitudes and values of stakeholders – something companies don’t always spend enough time doing.  Nike is taking a stand to reflect the attitudes, values and beliefs of their current and future customers. Being risk-averse to preserve market share doesn’t work anymore.”

Sprehe also said APCO’s research shows that companies willing to lean into risk and take a chance on something they believe in will come out “better and fitter in the end – even if it means a short-term hit to their bottom line.”

Nonetheless, involving Kaepernick in this campaign also positions Nike in a revisionist light, following its past PR troubles with regard to human rights and gender equality. While there are still horror stories around the sweatshop conditions that Chinese workers have been subjected to while making Nike shoes, the brand has faced more recent crises surrounding its lack of transparency around the ousting of its VP of diversity and inclusion for sexual misconduct. That incident led to several discussions about what transparency actually looks like in PR, along with talk about how to create a culture of inclusion in a traditionally male-dominated workplace.

This certainly isn’t the first time Nike has aligned itself with left-leaning social issues in its ad campaigns. Ahead the 2017 Grammys, the company also launched an “Equality” campaign that earned coverage in several national outlets. Alicia Keys tweeted out the ad during the ceremony, too, and Nike kept up the messaging following the conclusion of the broadcast.

Nonetheless, the brand’s alignment with Kaepernick is unprecedented, next-level culture marketing. We’ll be watching to see what the NFL, which counts Nike as its primary apparel partner, will have to say about the new ad campaign. Nike’s support for Kaepernick serves as a reminder that, though the NFL has considerable influence over controlling the cultural narrative around its game, its biggest brand partners may have more.