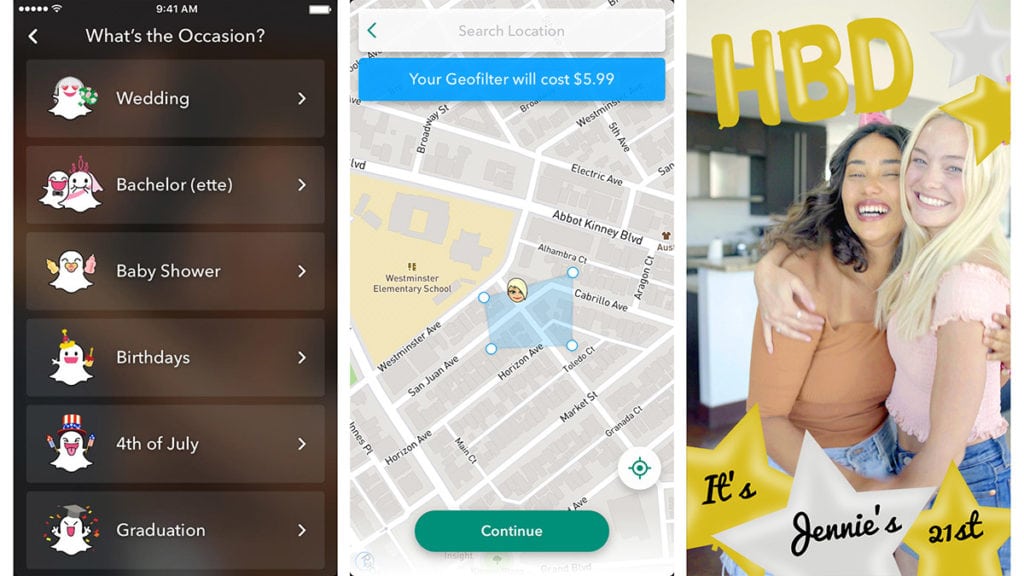 Paid social just got a little easier on our favorite ephemeral social network. Snapchat announced that users can now design Custom Geofilters within the app via an easy-to-use interface. Just open the Settings menu, tap On-Demand Geofilters and you’ll be able to select from a list of occasions, such as Graduation, Wedding and Birthdays. Then you can choose from a number of templates and edit them with the same text, Bitmoji and sticker tools that you use on snaps.

You then choose a time and location for the Geofilter and pay within the app (prices start at $5.99), and can monitor metrics like number of uses and number of views. Being able to do this all on mobile represents a lowering of the barriers to entry, and though it seems intended to get more everyday users on the Geofilter bandwagon, the move also makes it that much easier for brands working at any budget to promote something locally.

This update also achieves a nice synergy with the new Snap Map to set the platform apart from others: It gets users thinking about Snapchat not as a decentralized place where users interact anonymously, but as a sort of augmented reality that is intimately tied to where people are in the real world and what they are doing there. It encourages and rewards people getting together and meeting face to face. In this way it’s almost an anti-Twitter, and some brands, depending on their identity and audience, would be well served to keep the distinction in mind.

For more on the latest in social, don’t miss the Big 4 Social Media Conference, August 9-10 in San Francisco.