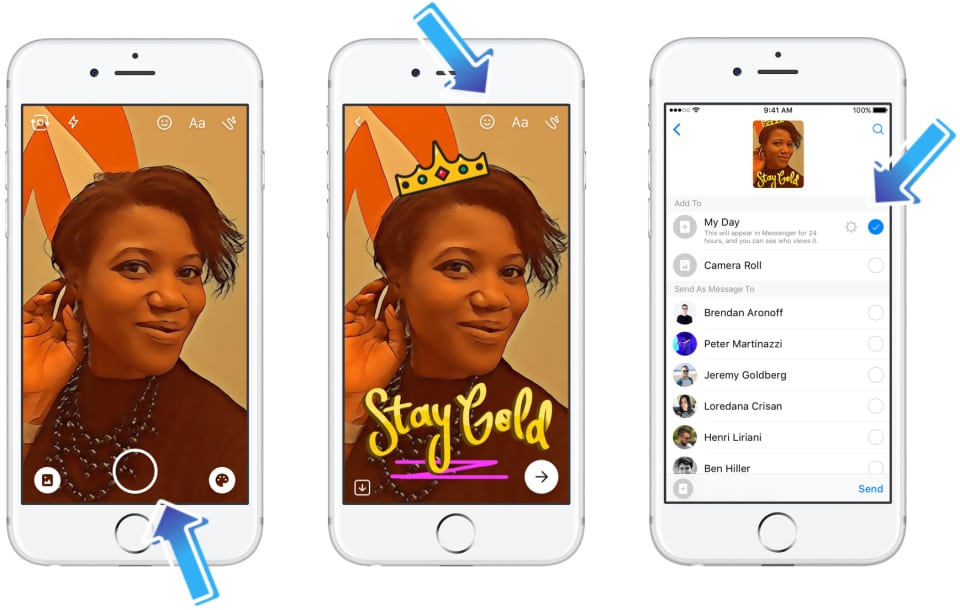 If imitation is the sincerest form of flattery, Snapchat must be feeling full of itself this week. Even before everyone had a chance to absorb the news and implications of Instagram’s new geostickers, parent company Facebook officially launched Messenger Day, another clone of Snapchat’s “Stories” format, for iOS and Android.

The feature will look and feel very familiar to users of Snapchat and Instagram Stories: The camera is full screen, you can hold down the camera button to take video and move your finger up and down the screen to zoom in and out, you can add stickers, art and text, and—you guessed it—your posts will disappear after 24 hours. You have the option of sharing your post with all your friends, select friends or group chats. So what are the differences? For one thing, Messenger Day shows friends that are active now, and when you view a post, you are prompted to respond with a message or a prepared reaction like a heart or “Wow.” Both of these are meant to spur conversation more naturally. Another key difference: As with Instagram Stories, still no face-recognition lenses, one of Snapchat’s most charming features.

The introduction of Messenger Day illuminates Facebook’s choice to separate Messenger into its own app and more or less force users to install it, an unpopular move at the time. The existing user base is huge, and so is the potential for monetization: Facebook VP of marketing David Marcus told TechCrunch that the app would “’probably’ insert advertisements between posts.”

The bad news for communicators is that this confuses even further the choice of where to focus your social media efforts; the good news is that the unabashed copying of Snapchat’s functionality means the learning curve is extremely low.