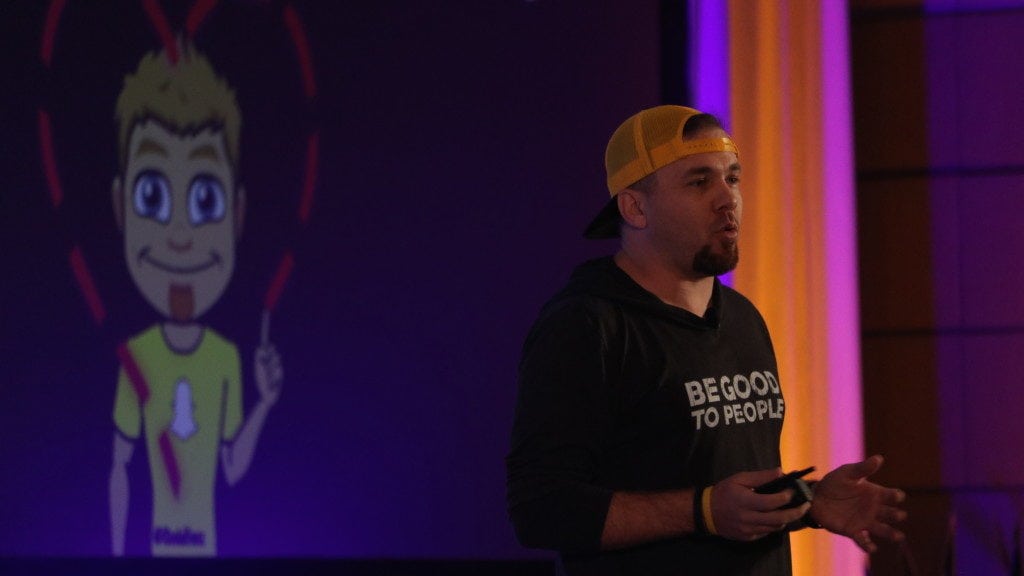 After a late night of networking and social networking, some might have had doubts about the energy level of the Social Shake-Up’s morning opener. Within seconds of taking the stage May 8, keynoter Brian Fanzo eliminated all doubts.

A self-confessed fast speaker, Fanzo, CEO, iSocialFanz LLC, launched into his freewheeling talk at breakneck speed. Donning fluorescent sneakers, jeans, a shirt that read, “Be Good to People,” and a yellow ball cap emblazoned with the slogan, “Press the Damn Button,” Fanzo, 36, looks like someone who’s stoked about the latest social media tools. And he is. Fanzo never calls to reserve flights on Delta, but tweets requests to the carrier’s customer service team. He also praises Twitter because it lets us “connect with people who don’t know us, like us or need us.” Facebook’s proposed dating app has him cautiously excited, ditto its proposal to use VR to re-create your childhood bedroom by using old photographs.

A change evangelist, Fanzo’s initial thrust about social media briskly changing our lives was preaching to the choir at Social Shake-Up. “We have to fall in love with change [since] in social media change happens every day…although it’s hard, it’s scary…[and] most people…try to avoid it.”

It’s a challenge “to the people in this room,” Fanzo told Shakers, to make sure the next time Zuckerberg’s on the Hill the questions will be better informed. Many of those who asked questions on Capitol Hill, he said, “are a lot like your customers.” His message: Shakers and those in social need to inculcate social’s resistors and the ignorant, but do so gently.

His plan for easing people into social could involve something “as simple as a conversation,” he said. Other steps to ease change, he said, include “educating it,” explaining to people “why” things are changing. He also urged Shakers to “inspire” and “motivate” change. Fanzo also challenged Shakers to “shine the light” on positive things social media is doing.

Fanzo’s message of high-speed change via social is his overlay. Dig deeper and you realize his change recipe includes large doses of good, old-fashioned humanity and a bit of homespun philosophy. Being yourself on social, whether a brand or a person, is a central concept. “When my clients ask me how to answer a question [on social], I tell them to do it honestly.” When you don’t know the answer to a question, say so.

In addition, he espouses social being far more than a vehicle for marketers. For example, he’s excited about Facebook chief Mark Zuckerberg’s push for “meaningful interactions,” even if it means people will spend less time on the platform. It’s part of Fanzo’s deeper message of “returning the social to social media…this,” he says, “is where the power of social media is.” He loves Instagram “because it’s tough for marketers to mess it up…it actually pushes you to be social on social media.” On the other hand, “Social media was not built to replace a handshake.”

Asking two questions he says he repeats nearly every time he speaks, Fanzo says, “Is there any brand that’s perfect?” The room is silent. “Is there any CEO who’s perfect and knows all the answers?” Silence again. Yet marketers, he says, are in the business “of building trust” and it’s scary to admit your brand isn’t perfect. Clearly, though, “people don’t trust brands or logos…so [be authentic and] stop trying to convey perfection,” he says.

Deftly mixing in elements of change, Fanzo urges the audience to “get on the video bandwagon if you’re not already…[since] 81% of Internet traffic will be video by 2020.” Still, authenticity is paramount. Social video, he says, “is real” and “will bring us back to the authenticity of social media…and the coolest thing you can do on live video,” he says returning to an earlier example, “is to say ‘I don’t know’ to a question…it adds validity to what you do know” and makes you and your brand appear “more human…Perfection,” he says, “is a fairy tale.”

Lest you think Fanzo’s entire message is of the soft variety. Eventually he turns to content and tactics for success.  “Create content in real time that’s delivered at the right time.” And use social media “to shrink the distance between us and our customers.” To Fanzo, one key to success on social is to provide experiences. “People are craving access,” give it to them where they live. “The field of dreams marketing [concept] is broken. If you build it, they will not come. Go where the audience is.” And if you lack engagement, “your posts are not engagement-worthy.”

Seth Arenstein is editor of PR News. Follow him: @skarenstein