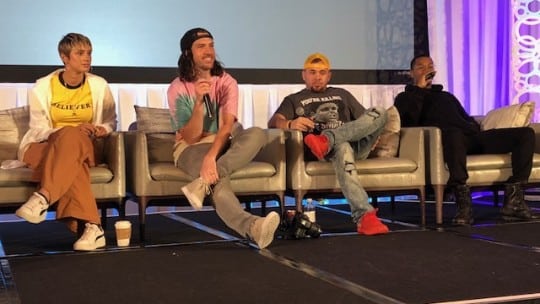 At SSU 2018, 4 Top Influencers Got Raw and Real About Influencer Marketing

Influencers who want to make the biggest impact possible on their audience should leverage the platform that best speaks to them, and focus on being raw and real.

That was the central thesis of the May 9 closing panel discussion at The Social Shake-Up in Atlanta. The panel featured four people who have earned the right to be called influencers (a much-abused descriptive term): Brian Fanzo, CEO of iSocialFanz, Work With The Coach CEO Nathan Pirtle, entrepreneur YesJulz and Snapchat pioneer Shaun McBride, better known by his handle Shonduras.

“Snapchat took us from this world of perfectly curated content and showed us that raw and real are just as powerful, and often more important,” said Shonduras. But he acknowledged that the struggling platform must work closer with influencers and brands in order to make the changes it needs to survive.

McBride added that those concerns were voiced and addressed at a May 8 meeting he attended with Snap Inc. staffers in which influencers were encouraged to provide feedback on the app’s latest redesign—one of several changes that has sent online personalities fleeing the platform in droves.

Pirtle later turned the discussion toward Twitter, a platform he embraces because it allows him to better control the conversation. “It’s all about how you follow, who you target and the conversations,” he said. “I try to stay away from all the political stuff and just reach the people who want to grow. Instagram hasn’t been great for me—I’m not that cute, I’m not a model and my messages are long. I can’t drop a one-minute video and get my point across.”

Fanzo, meanwhile, uses Twitter lists to stay organized, but relies on podcasting to grow his brands.

“My podcasting community is the most intimate community I have,” said Fanzo. “People come up to me and cry, give me a hug. I love podcasting because it allows the consumer to paint their own picture of the creator.”

The biggest misconception about influencer relations, said Shonduras, is that every creator and influencer knows what they’re doing. “The majority are just really lucky to be where they’re at; they make exciting content, and they focus on clickbait, numbers and views,” he said. “They will check all the boxes that you give them without actually promoting your brand. That’s why influencer marketing is the Wild West. It’s getting better and better, but you can still get burned.”

Hashtags, he added, will not sell your product. “It’s going to make you look branded and mechanical,” he said.

“Getting a hashtag trending is the biggest crock that there is,” said Fanzo. “I use hashtags as the glue to the conversation that brings people in. Using hashtags as the metrics for valuing an influencer is a crock.”

Shonduras argued that a symbiotic relationship between an influencer and a brand’s story is key. “By accepting the brand, getting together and building a campaign that makes the brand look like the hero, everyone wins,” he said.

That kind of collaboration, grounded in the quest for authenticity, can make some brands nervous. Pirtle had an experience recently with a brand that wanted authenticity, but not toomuch authenticity. “Sometimes people go and sign up for a paycheck, but don’t know what comes along with it,” he said. “My strongest suit with my clients is that I have a digital marketing company, so we can put a plan together and deliver it back.”

When this kind of honest, open exchange doesn’t happen, brands don’t know what they want, blame the influencers and influencers blame the brand. “If it doesn’t work, you have to let the money go,” Pirtle added.

Julz added that she’s a fan of a particular energy drink brand, even though she doesn’t like energy drinks, because she supports its culture. “If you are one of those brands that might not be obviously cool, there are ways [to attract influencers],” she said. “There’s an overwhelming sense of the people in my generation wanting to make an impact. We all want to do something that makes us feel like we’re part of the change.”

Julz also explained that, though she doesn’t have a big-brand budget to pay other influencers, she can leverage her relationships to facilitate a more personal creative relationship. “I know what my friends are passionate about, what their hopes and dreams are, so I can connect the dots and get them where they’re trying to go with what they’re doing. I care about them and their path.”