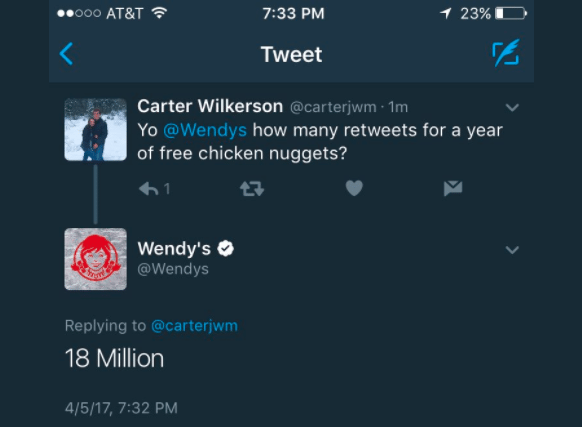 Twitter had quite a year, cementing its status as a cultural touchstone through politically weaponized tweets and hashtags that sparked a national conversation. Oh yeah, and then there was that whole 280-character count thing, too.

To ring out 2017, the platform recently provided some data ranking its most popular tweets. Surprisingly, not one of them was authored by Donald Trump (though he was the most tweeted about elected official of the year). Another notable absence: The #MeToo movement sparked by a tweet from Alyssa Milano didn’t make the list of most tweeted activism hashtags, but that’s only due to timing, as it emerged late in the calendar year.

While news was often made on Twitter this year, the platform also laid bare the nation’s social and political divisions. And yet, the most retweeted post of the year concerned the nonpartisan quest of a man looking for a year’s worth of free chicken nuggets.

The Most Retweeted Tweets of 2017

HELP ME PLEASE. A MAN NEEDS HIS NUGGS pic.twitter.com/4SrfHmEMo3

“No one is born hating another person because of the color of his skin or his background or his religion…” pic.twitter.com/InZ58zkoAm

With the current devastation in Houston, we are pledging $0.15 for every RT this gets! Please forward this along to help out those in need! pic.twitter.com/lodyOBE0eG

broken.
from the bottom of my heart, i am so so sorry. i don’t have words.

Thank you for everything. My last ask is the same as my first. I’m asking you to believe—not in my ability to create change, but in yours.

While Barack Obama owns two of the five most retweeted posts of the year, the three most tweeted about elected world leaders were Donald Trump, followed by India’s Prime Minister Narendra Modi and Venezuala’s President Nicolás Maduro.

And as important as the #MeToo movement has become in the national conversation about sexual harassment, most of the top 10 activism hashtags concerned President Trump.

10 Most Tweeted Activism Hashtags in the U.S

For those looking for an escape from all of the political cacophony and heated rhetoric, the top tweeted television show was Game of Thrones, while the movie with the most hashtag mentions was Wonder Woman.

Most Tweeted About TV Shows in the U.S.

Most Tweeted About Movies in the U.S.