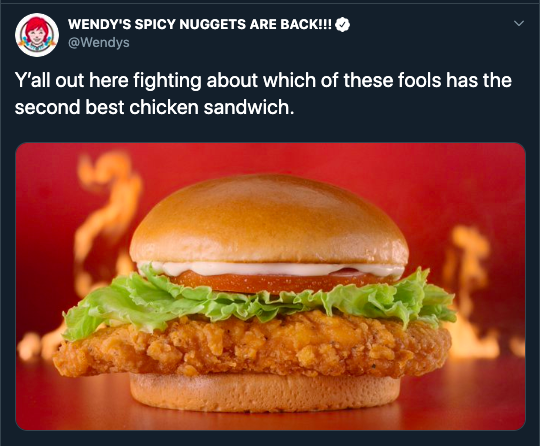 It’s been a busy week for fast food brands on Twitter.

As Popeyes launched its first-ever chicken sandwich, competitors Wendy’s, Chick-Fil-A, KFC and (surprisingly) Boston Market entered the fray hungry for some share of voice. Adweek’s David Griner, in a pitch-perfect rundown of the week’s Twitter developments, ranked each brand’s tweets and responses, offering Popeyes the crown for its ability to hold its own against reigning king of Twitter snarkdom, Wendy’s.

While not every marketer has the great fortune (or heavy burden, depending) to be running social for a brand with millions of Twitter followers, there are several takeaways to note from the week’s big winners and losers.

Staying silent can be a risk in itself. While there’s a case to be made for steering clear of Twitter conversations irrelevant to a given industry (like presidential elections), audiences take notice when a monolith doesn’t respond to a fight on its own turf. Griner argued that KFC missed an opportunity by not weighing in on the fried chicken debate. It’s hard to disagree, especially considering KFC’s penchant and talent for the absurd and irreverent, as with its Mother’s Day campaign:

Make a special Mother’s Day video specifically for your mom at https://t.co/M64sNvoDvO. pic.twitter.com/4rXeWWiBLi

Still, it’s possible this was an issue of timing more than anything else. August is a noticeably quiet month for corporate as executives take their final summer vacations; the brand’s Twitter and Instagram accounts haven’t been active since late July, as of this writing.

Keep a wordsmith on retainer. With just 280 characters to play with, every word—and syllable—counts on Twitter. To stand out, consider seeking creatives for your social media team with a background in poetry, hip-hop or creative writing. Wendy’s, responding to a commenter, tweeted a response that could have won a freestyle rap competition (try saying it out loud):

See critics as opportunities to clap back. While the content creators at Wendy’s, Chik-fil-A and Popeyes put some creative behind their initial tweets, the most Twitter chatter came about through the brands’ quote-tweets and direct responses to commenters. As Griner noted, outside players like prolific nugget retweeter Carter Wilkerson and 90’s radio darlings’ Smashmouth, pulled “into the crossfire,” served as ideal foils for the brands duking it out. Since 2015’s quote-tweet feature launched, savvy brand marketers have used negative comments as opportunities for humorous jabs, dragging the opposition by proxy. (We may never forget VitaCoco’s jaw-dropping response to its biggest critic this spring.)